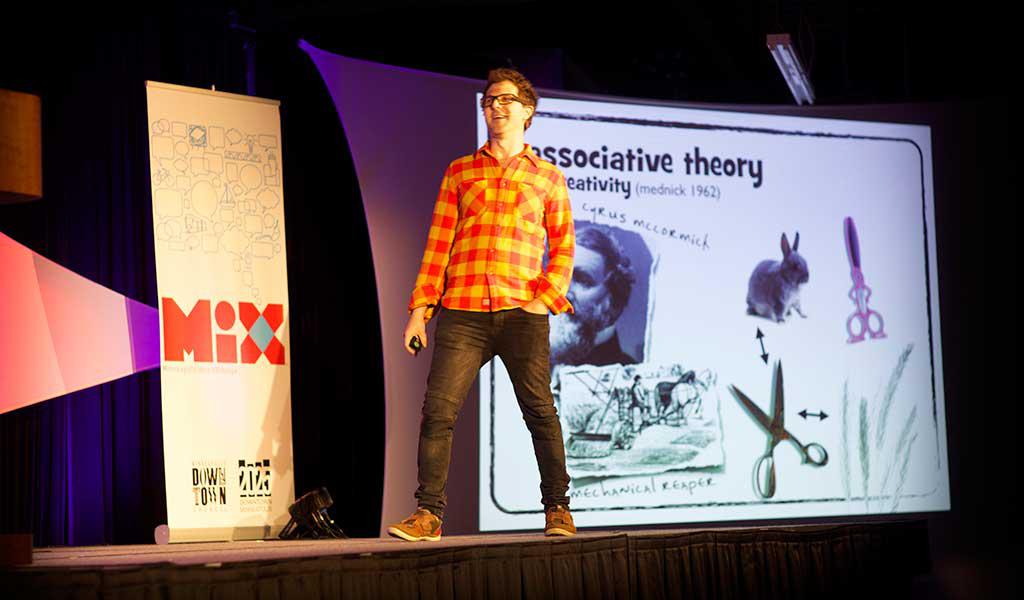 This file photo from Oct. 2, 2014, shows University of Minnesota director of product design Barry Kudrowitz during his keynote about the power of ideas. The MiX returns next week with another collection of speakers aiming to inspire thought and collaborat

A year ago, the Minneapolis Idea eXchange kicked off with a preview event inside City Center. The event, which was an evening gala that aimed to give people a glimpse into what this annual festival of ideas will entail, drew approximately 200 people and sparked conversations about the power of communicating and thinking up new concepts for the future.

Now, MiX is preparing for its second event coming up next week that will once again try to inspire engagement and conversation through key note addresses and networking opportunities. The 2015 MiX will take place September 28, October 1 and October 2 at Westminster Presbyterian Church and on the adjacent Piazza on the Mall, both located at 12th Street and Nicollet Mall.

The event partners with the Westminster Town Hall Forum series, which this year features the following speakers. All the events are free and open to the public, with the lone caveat that you come ready to think outside the box, stir up some thoughts and see if you, along with those around you, can come up with ideas that just might bring positive change to our downtown community.

A little background on the event. MiX is one of the six committees born out of the Minneapolis Downtown Council’s Intersections: Downtown 2025 Plan. It was created based on one of the 10 key initiatives of the 2025 Plan to create a Festival of Ideas for the downtown area, aiming to create an annual festival that will bring visitors, innovative thinking and civic energy to a city already noted for citizen involvement. The festival focuses on creating a better future for everyone—locally, nationally and globally.

The preview event last October was successful because it brought people of all walks of life in the downtown community together for one inspiring evening. Mayor Betsy Hodges kicked everything off by addressing the crowd, and there were council members, educational figures, faith leaders, business influencers and downtown residents all coming together for one cause.

I think one of the key points to think about with this event comes from the 2025 Plan’s initiative statement for the Festival of Ideas: Minneapolis has always been very forward-thinking in its industry and its culture. We’ve evolved immensely over the years, starting as a mill community and evolving today into a downtown that is connected globally through its Fortune 500 retail and banking corporations, its well-respected advertising and marketing culture, its ever-growing technology boom and its respected educational systems.

MiX is intended to be a forum for conversation and enhancement of that forward thinking. It is a way for people to come together, meet others, network and have a fun time—all while thinking about what could be the next step for our community. Inventions, methods for addressing issues, opportunities for collaboration—everything is on the table.

At the MiX launch event last year, the statement was made that there is no bad idea, and the best way to have good ideas is to have a lot of ideas. That’s the philosophy at this year’s event.

Be part of the MiX. Join us next week.